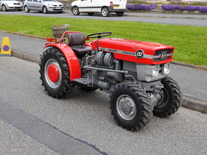 T﻿he 15th annual Glenluce Tractor Rally, held on Sunday June 7th was a success before it even started with a record entry of over 100 tractors and stationary engines. And, to cap it all, the weather, after a dismal Spring, gave of its best with a beautiful sunny afternoon that brought out the crowds of visitors.

Significantly this year there were a number of tractors that had never been seen at the Rally before and about 20% of the entrants were new. The presentation and turnout of tractors was exceedingly high and the sun shone  brightly on painted metal work. Ken McKie, Chairman of the Rally, expressed his delight at the enthusiasm of the drivers in the effort taken to  turnout their tractors to the very highest of standards.

There were many outstanding exhibits, and whilst difficult to single out any one tractor, the neat little Massey Ferguson 132 belonging to Tom French from Cumnock certainly caught the eye. 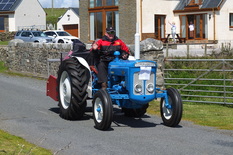 The Road Run
The Road Run to Auchenmalg, via Stairhaven, and back to Glenluce  proved popular with a large number of drivers, and the new parking measures on Glenluce Main Street worked well so there was no congestion at the start of the run. Drivers were once again rewarded with ice cream at the half way stop at Auchenmalg. Everyone returned safely to the Park this year and there were no mishaps on the route. 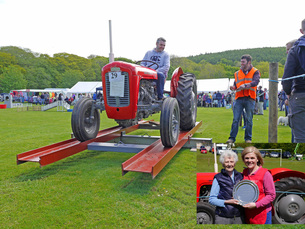 This competition, first held in 2014 in memory of the late Roy McKie, and sponsored by Douglas Engineering Ltd,  was hotly contested by a  number of drivers who wanted to demonstrate their precision driving skills. The out right winner was Alan McKie from Glenluce who won the £50 prize and commemorative silver salver. In Alan's absence, his wife Karen was presented with the silver salver by Mary McKie of Wigtown (inset photo). 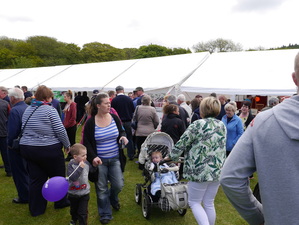 ﻿Maggie's Kitchen and the 2015 Charities﻿


The long lines, throughout the afternoon, waiting to be served in Maggie's Kitchen speak for themselves. This popular attraction run by Maggie Stewart and her team of ladies is once again set to raise a lot of money for the 2015 charities Marie Curie and Alzheimers Scotland. The Raffle on the field also raised a record amount and the Glenluce Cubs were successful with their Guess the Weight of the vintage tractor competition which was sponsored by Shire Agri-Hires of Bridgemill, Glenluce.